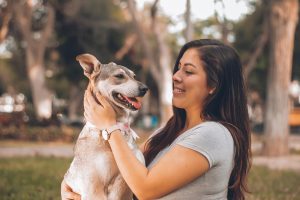 This article was written by Melissa Lyons, a 2011 graduate of the WVU College of Law. Ms Lyons serves as the chair of the West Virginia State Bar’s newest committee, the ANIMAL LAW COMMITTEE, which she helped to form in April 2015.

This article has been reprinted with permission from the

The United States is in the midst of a nationwide panic. It seems everywhere one turns there is a story of a dog “mauling” someone. The media has identified a villain – the pit bull – as the culprit of these “vicious attacks.” The public has reacted with its usual zeal by enacting breed specific legislation around the country. Even West Virginia is not immune. The pit bull issue was limited to small pockets of city ordinances in WV, until a circuit court decided to create a presumption that pit bulls are inherently vicious and ordered the euthanization of a mixed breed dog named Tinkerbell For the first time, the WV supreme Court of Appeals weighing in on the pit bull panic gripping the nation while Tinkerbell’s life hung in the balance.

For the Blatt family, March 31, 2014, started out like any other day. It was warm, so the Blatt children were playing outside with some neighbor children. The Blatt family pet, a mixed breed dog of unknown canine heritage name Tinkerbell, or Tink, was confined to the house. She is a playful dog who loved to romp with the Blatt children and the neighbors. On this particular day, she was confined in the home until a relative inadvertently let her outside. Tink made her way to the backyard and began playing with a ball, one of her favorite toys. L.L., a neighbor child, took the ball and held it over his head. When Think jumped up to retrieve the ball, she nipped L.L. in the face. Tink immediately ran and hid inside the home. L.L. required five stitches to his upper lip and nine stitches to his lower lip. The Blatts were charged with harboring a vicious dog pursuaant to WV Code 19-20-20. Tink was seized by animal control.

Two hearings were held on the matter. The state proffered little testimony that Tink was vicious or had shown any signs of aggression, instead, the state’s testimony primarily focused on Tink’s breed and general statements about pit bull behavior rather than Tink’s temperament. The state then asked the circuit court to take judicilal notice of Hardwick v. Town of Ceredo for the proposition that pit bulls are inherently vicious. The Blatts were ultimately acquitted; however, Tink was ordered to be euthanized. In its final order, the circuit court found a presumption that pit bull terrier breeds are dangerous, aggressive, a public health hazard and are unpredictable in nature. The circuit court deemed that her breed, coupled with the single bite incident, were sufficient to deem Tink as vicious under WV Code 19-20-20. The Blatts appealed.

The Supreme Court then turned its attention to the vicious dog statute itself. In Durham v Jenkins, the Supreme Court found that the statute was criminal in nature. In Blatt, the Supreme Court clarified that a criminal conviction was not required to order a dog destroyed pursuant to the statute. In a new syllabus point, the Supreme Court held: “For a magistrate or circuit court to determine that a person has committed the crime described in W.Va.Code 19-20-20 (1981), it must find, beyond a reasonable doubt, that the person (1) owned, kept or harbored (2) any dog (3) known to the person (4) to be vicious, dangerous, or in the habit of biting other people. However, the magistrate or circuit court need not determine that a crime has been committed pursuant to W.Va. Code 19-20-20 (1981) to proceed, at its discretion, to order the destruction of a dog pursuant to that statute, the magistrate or circuit court must determine that there is satisfactory proof that the dog is dangerous, vicious, or in the habit of biting or attacking other persons or other dogs or animals.

Ordering the destruction of a dog is an exercise of the State’s police power and is therefore subject strict limitations. To warrant the destruction of dog, the court must consider the dog’s past behavior to determine the risk of future harm. The Supreme Court noted that in this context, risk is found by determining if a dog is vicious, dangerous or in the habit of biting persons. Although viciousness had not be difined, the Supreme Court state that viciousness can be bound by repeated vicious acts. The Supreme Court recounted Jividen v Law for the proposition that ‘traits like rambunctiousness and friskiness are insufficient to impose strict liability.”

Applying these principles to Tink’s case, the Supreme Court reversed the reversed the lower court order. The Supreme Court found no evidence to indicate that Tink was in fact vicious. The evidence indicated that the injury was an accident – caused by Tink’s rambunctious attempts at play. The lower court’s finding was based on an unlawful and biased presumption and not the facts of the case itself.

Only June 17, 2015, nearly 15 months after the incident, Tink was finally returned to her family. Tink had her day in court and broke through the pervasive “fear-mongering and breed specific bias.” She won her freedom on the merits of her case. Today, she is free and rightfully so.

*(NOTE: the above photo of a dog is not of TINK BLATT but instead a file photo)*