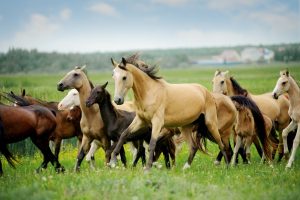 Dummy Foal syndrome is a foal that suffers from neonatal maladjustment syndrome (NMS) which occurs in about1-2% of births. Often during the first few hours after birth, the foal may appear normal but progressively deteriorates often becoming unable to nurse and fails to recognize the dam. The foal can diminish to the the point of seizures, recumbency, and death. Clearly, there is a neurologic difference in the dummy foal vs a normal foal.

Historically, NMS was blamed on lack of oxygen for the foal before, during or just after birth. Pathologist examined the brains of these dummy foals that died and found no evidence of hypoxia, edema or hemorrhage in brain tissue. Nearly 80% of dummy foals have recovered to full function with treatment; something not expected if irreparable damage was caused to the brain or spinal cord.

Dr.’s Madigan, Aleman, and Pessah from University of California at Davis examined NMS foal for other causes of their unique syndrome. The team identified a problem with concentrations of neuromodulating hormones (neurosteroids) of a fetus in the womb and soon after delivery. The presence of such neuroinhibitory steroids works like a sedative in conjunction with other substances (adenosine, progesterone and prostaglandins). These hormones keep the foal “quiet” during gestation and delivery so that it doesn’t tear the dam’s uterus and other vital organs. The sedated or quiet foal consumes less oxygen in the uterus and the foal remains quiet during birthing.

The neurosteroids or pregnanes are normally at high concentrations at birth and typically begin to decline steadily over the first 1-2 days. However, the plasma pregnane concentrations in these dummy foals remain elevated as compared to normal foals. Pregnanes of dummy foals are elevated at even higher levels than foals affected by sepsis. The neurosteroids exert a sedation effect on the central nervous system as they pass through the blood-brain barrier. With ongoing elevated concentration in the bloodstream and CNS, the affected foal fails to “wake up” and interact with the world outside of the womb.

Interesting findings by the UC Davis team were that administration of a pregnant (allopregnanolone) to healthy neonatal foals elicited transient signs of neonatal maladjustment syndrome, such as confusion and cessation of nursing. The the experiment, EEG measurement of the brain electrical impulses demonstrated that despite standing, the foals; brains underwent slow-wave sleep. As soon as the pregnant concentrations abated, these foals returned to normal, active behavior.

Pressure is exerted on the foal during birthing by the birth canal and this signals a decrease in neurosteroid levels. Foals delivered through a C-section or via a very rapid birth without normal uterine contractions and pressure may be at risk for NMS. These foals retain elevated neurosteroid concentrations in the bloodstream because of a lack of signaling caused by pressure in the birth canal. The doctors developed a method to simulate uterine compression on the already delivered dummy foal by applying ropes and mimicking birth pressures.

1. Rope harness is fitted to the foal.

2. Gentle pressure allows the foal to lie down and enter into a somnolent state. Rope pressure is sustained for about 20 minutes which is comparable to the second stage of labor. This signals the foal’s system to to awaken, along with a hormonal surge from the hypothalmicpituitary-adrenal axis that down -regulates production of pregnanes. Once the rope pressure is released, the dummy foal immediately converts into an aroused, nursing foal engaged with its surroundings. If done properly, the foal experiences no adverse effects from the procedure.