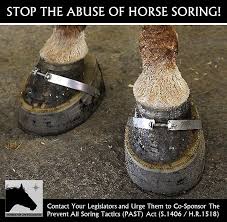 Rep. Ted Yoho, DVM (R-Florida), has introduced legislation in the U.S. House of Representatives to strengthen the federal Horse Protection Act and ban the practice of horse spring. The Prevent All Soring Tactics (PAST) Act (H.R. 3268) would outlaw using painful means to elongate walking horses’ steps to gain an edge in show rings, according to a release from the American Veterinary Medical Association (AVMA). The proposed legislation would give the U.S.Department of Agriculture (USDA) the authority to use inspectors rather than relying on the current self-policing system. Civil and criminal penalties for soring would also be intensified and allow violators to be prohibited from working in the industry.

Similar legislation was introduced in the U.S. Congress in 2014, but opposition countered with a weaker bill and no action was taken. “As a veterinarian and lover of animals, I feel the time is now to stop the practice of horse soring for good,” Yoho says in a statement from his office. “The walking horse industry has had since 1970 to reform their ways and come up with a a more ethical means to achieve their desired goal. They have failed to take advantage of this opportunity and now is the time for horse soring to end.”

Ron DeHaven, DVM, MBA, AVMA chief executive officer, praised Yoho’s initiative. “For more than 30 years, the AVMA has urged Congress to stop its political posturing, cut through the bureaucratic red tape and stand up for America’s walking horses,” DeHaven says in an AVMA release. “We encourage those in leadership to listen to their veterinary colleague, Rep. Yoho, and his colleagues in the Senate in passing this bill expeditiously to protect the health and welfare of America’s walking horses.”

This bill mirrors the PAST Act (S. 1121) introduced in the U.S. Senate by Sen. Kelly Ayotte (R-New Hampshire). Both pieces of legislation have more than 150 co-sponsors, and the Senate version is endorsed by more than 200 animal advocacy and veterinary organizations.

Font Resize
Contrast
Accessibility by WAH
Call Us Text Us